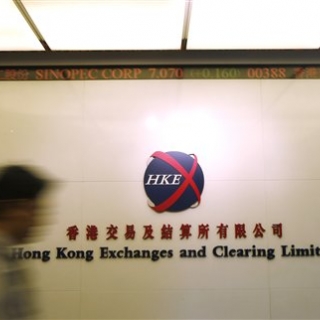 Hong Kong stocks plunged Wednesday as investors braced for further unrest following days of violent protests that have almost ground parts of the city to a halt, with police warning it was close to "total collapse".

After more than five months of standoffs, the demonstrations appear to have entered a much more violent phase.

And with the fighting showing no sign of easing, there are increasing worries about the outlook for a city known for its safety and ease of doing business, with police on Tuesday saying the rule of law was on "the brink of total collapse".

There are even whispers that Alibaba's plans for a share sale worth up to $15 billion in the city -- which reports said Wednesday were approved by regulators -- could be affected. The firm had already called off a summer listing owing to the protests and the China-US trade war.

The benchmark Shanghai Composite Index ended 0.33 percent, or 9.58 points lower, at 2,914.82, while the Shenzhen Composite Index, which tracks stocks on China's second exchange, was marginally higher, adding 0.11 points to 1,614.30.

Stocks ended higher in thin trade Friday, getting a lift from positive news on a coronavirus treatment. The Dow Jones Industrial Average rose around 369 points, or 1.4%, to end near 26,075, according...

Hong Kong stocks closed sharply lower Friday, in line with an Asia-wide sell-off, with investors also spooked by fresh infections in the city that have led to the reimposition of containment measures ...

U.S. Stocks Rise At The Open On Coronavirus Treatment Hopes...